How Much Food did we Grow in One year? 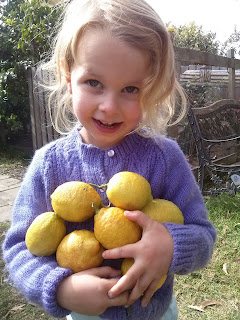 Our one tonne challenge is over. For 365 days we have weighed and recorded everything that we have harvested from our frontyard garden. Everything from eggs laid by the chookies, potatoes, apples, artichokes, tomatoes, chillies, garlic, cucumbers, zucchinis, pumpkins, herbs, salads, lemons and much much more.

All of the children have lent a helping hand, picking nasturtiums, strawberry guavas and tamarillos, (some even got weighed before they were eaten!) heading inside, balancing it on the scales, climbing up on the bench and writing it on our wall of blackboard...... 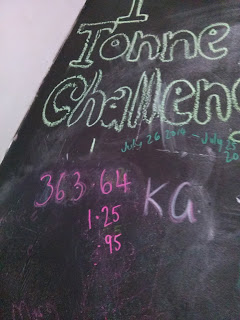 Over a kilo a day from a normal suburban yard ain't bad, and, while we were a little shy of our  one tonne goal (which we are still determined to conquer), it just goes to show the value of a regular suburban lawn, if you dig it up and grow veggies instead. We calculated the average price per kilo for our top ten veggies based on the prices of Coles (shudder) and realized that (if we ever shopped there) we would have saved close to $4000 in fresh produce over the year!

this year our 2 big players, the grapefruit and oranges didn't fruit, nor did our bananas and all of our nectarines were lost to pesky possums and parrots....grrr next time gadget, next time! But our big winners this year have been lemons, sweet potatoes, yakon, potatoes and Jerusalem artichokes. 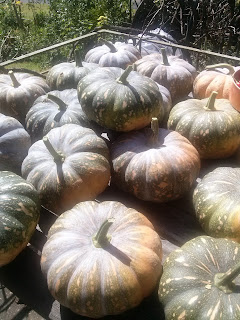 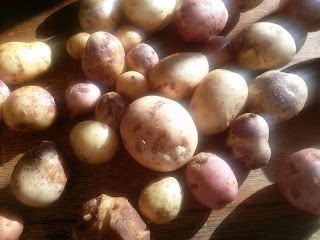 On the bright side we did harvest over 90kg of pumpkins from just 3 vines!  We were also surprised to realise we harvested over 900 eggs from the ladies over the year. 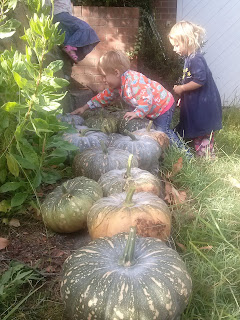 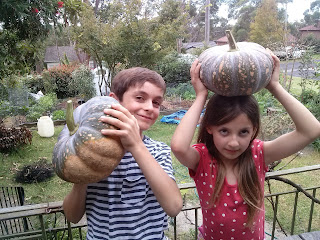 When we started our one tonne challenge we were only growing in the front-half of our frontyard (about 70 square metres of space). As the year progressed so did our desire to utilise all of the space we have so we covered the bottom drive and the rest of what remained of our front lawn with woodchips and manure to increase our growing space by another 20 sq metres.

Now that the only lawn we have is a narrow path to the front gate, we feel that we can finally, and in all honesty, call ourselves "frontyard farmers"!


After harvesting the pumpkins in the drive we realised it was the perfect space for a polytunnel...well a mini, home-made one. Using bamboo harvested from a friend's backyard, some zip-ties, clear plastic and a few star pickets, we constructed what has been a very handy little greenhouse for under $50. 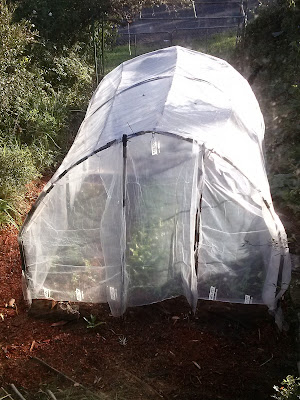 So what's next you might ask? We are going to do it all again. With all the new growing space, we are curious as to how close we can get to the illusive 1 tonne. But its not about getting as much as we can from the space that we have, rather its about making the most of it, and making it better than how we found it. In a funny way its a habit, but also we find it insightful and rewarding, to fully appreciate it... the preparation of a bed, improving the soil, planting a seed, watching it grow through the seasons, and finally harvesting it for our  family table.

Putting them to Work
Good ol' fashioned, hard work is rewarding. For adults, preparing a bed for planting, trudging wheel barrow after wheel barrow of manure in to your garden or back breakingly planting out 150 spring seedlings - whilst you finish up exhausted, sore and a little more stinky,  you're rewarded with a great sense of satisfaction, these days, our daily routines of roaring back and forth to work in the traffic and sitting in front of a computer screen all day rarely leaves us with a sense of satisfaction. It's the same for kids, they thrive on hard work, having a challenge, getting dirty and achieving a daily goal. Not sitting in front of an x-box, an ipad or the tv, these empty things don't satisfy kids. 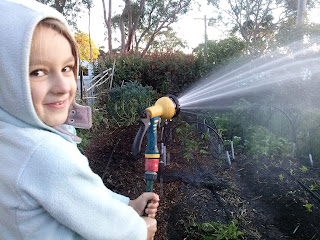 Our kids have daily jobs that they do every day, like many kids out there. We have linked these jobs to our family needs on purpose, so the kids know that their contribution is an integral part for the whole family's lifestyle. It's important not to deprive your children from the satisfaction that comes from hard work, no parent sets out with this intention. Our 9 year old son knows that when he feeds the chooks each morning, with grain, greens, scraps, clean water, collecting the eggs and cleaning out the coup, that the ladies will lay and we will get to enjoy their eggs. the smile on his face as he weighs them and puts them in the fridge is priceless.

Our 7 year old daughter rather prides herself as the domestic goddess, choosing to clean the family bathrooms each morning, wiping the basin, sweeping the floor, changing hand towels, returning tooth brushes to drawers etc, her completed job reinforces tidiness and a sense of each of us looking after each other in our home.

The two youngest, 5 and 3 year olds, water the seedlings each morning between 6:30-7am. They empty the compost into worm holes and water the entire patch. This means cold fingers from using the hose, hurrying up with breakfast and being responsible with water usage, turning off taps and checking over the garden. By doing their job properly then the seedlings thrive, can be planted and then harvested for our family, they are very aware of this.

Whats growing in the patch

With Spring just around the corner we wanted to test-drive a few new varieties of veg. We're trialing a row of Siberian tomatoes that are already in the ground (mid Aug). These tomatoes are reported to be v tolerant to cool conditions but we doubt they're tolerant to frost, so we're expecting they'll be a good choice for the start and end of tomato season to extend the growing period - we'll report back and let you know how they go.

The coolest cukes for 2015 would have to be painted serpent cucumbers and Cuca-melons which are actually a miniature watermelon...yum. On the bean front we're excited about growing the Madagascan Lima bean which is a perennial, said to be prolific in its 2nd and ongoing years. They also make an outstanding falafel and are said to be a good alternate to fava beans for warmer climates.  Asparagus peas (also known as the winged pea) are next on our trial radar which as they suggest have a similar flavor to asparagus. We've also been growing a range of radish over the winter including Japanese daikon, hailstone (both white varities) and French breakfast. Interestingly enough we've noticed that slugs are quite attracted to the French breakfast but seem to mostly leave the others alone.

An oddity that we're given recently and are also thinking about trialing is a pea bean cross, or Pean, which we think is more commonly known as Hyacinth bean or Lablab. I don't know if the guy that gave them to us was trying to knock us off, but our initial research suggests that they may be rather poisonous, if not boiled repeatedly.... hmmm....worth doing your research! Has anyone else heard of the mysterious Pean? Love to hear from you Pean experts out there. 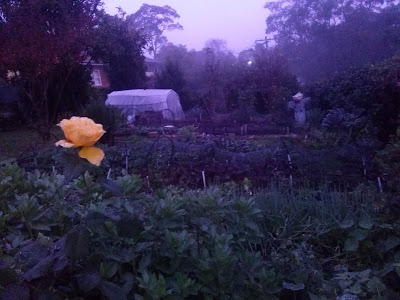 Next time,  more on Black soldier fly, and some ideas about a virtual community farm in the Mountains.